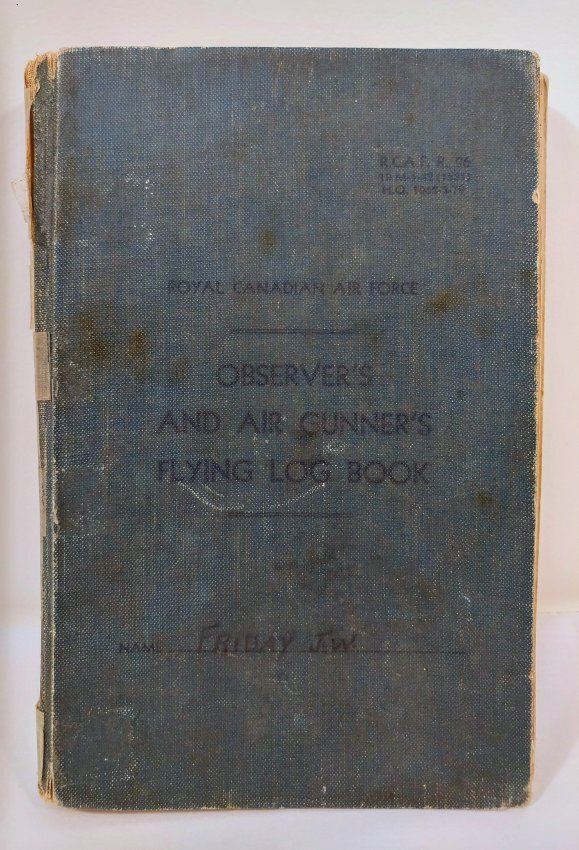 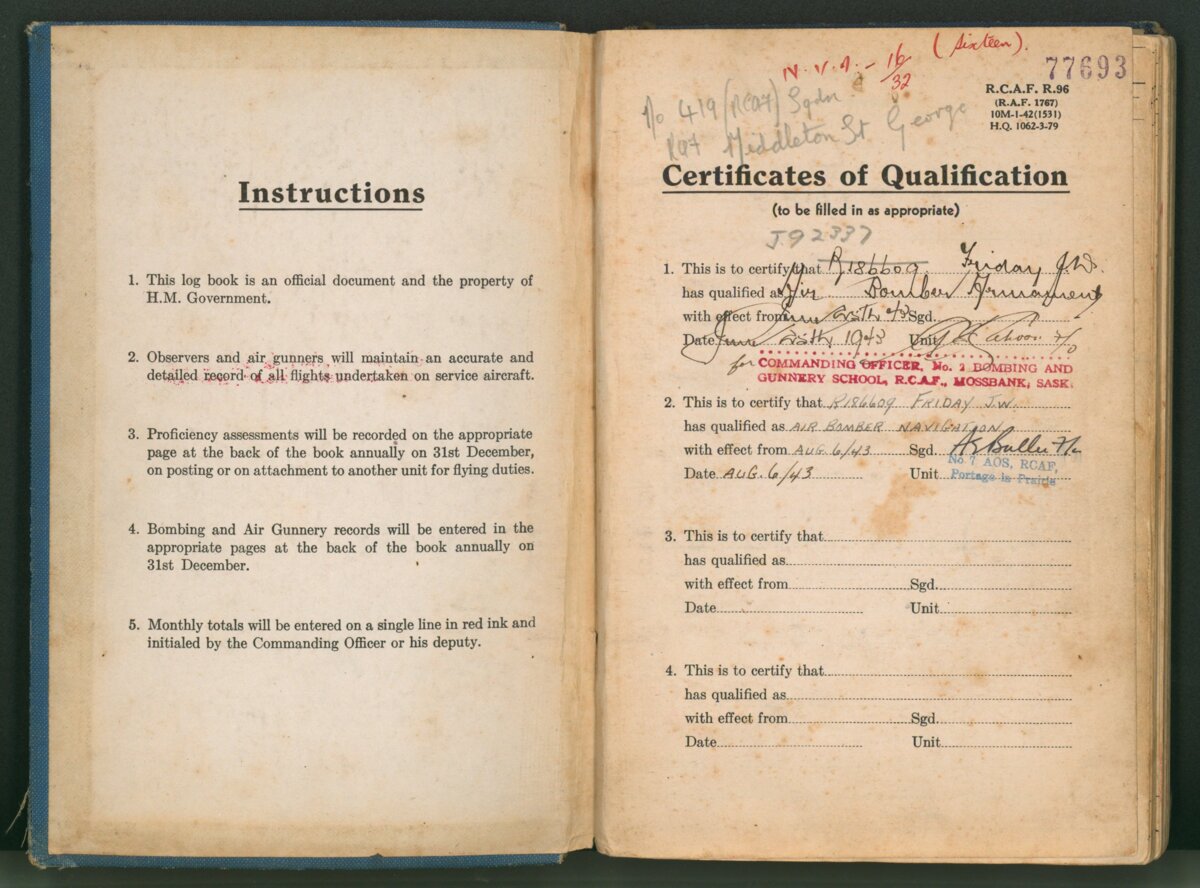 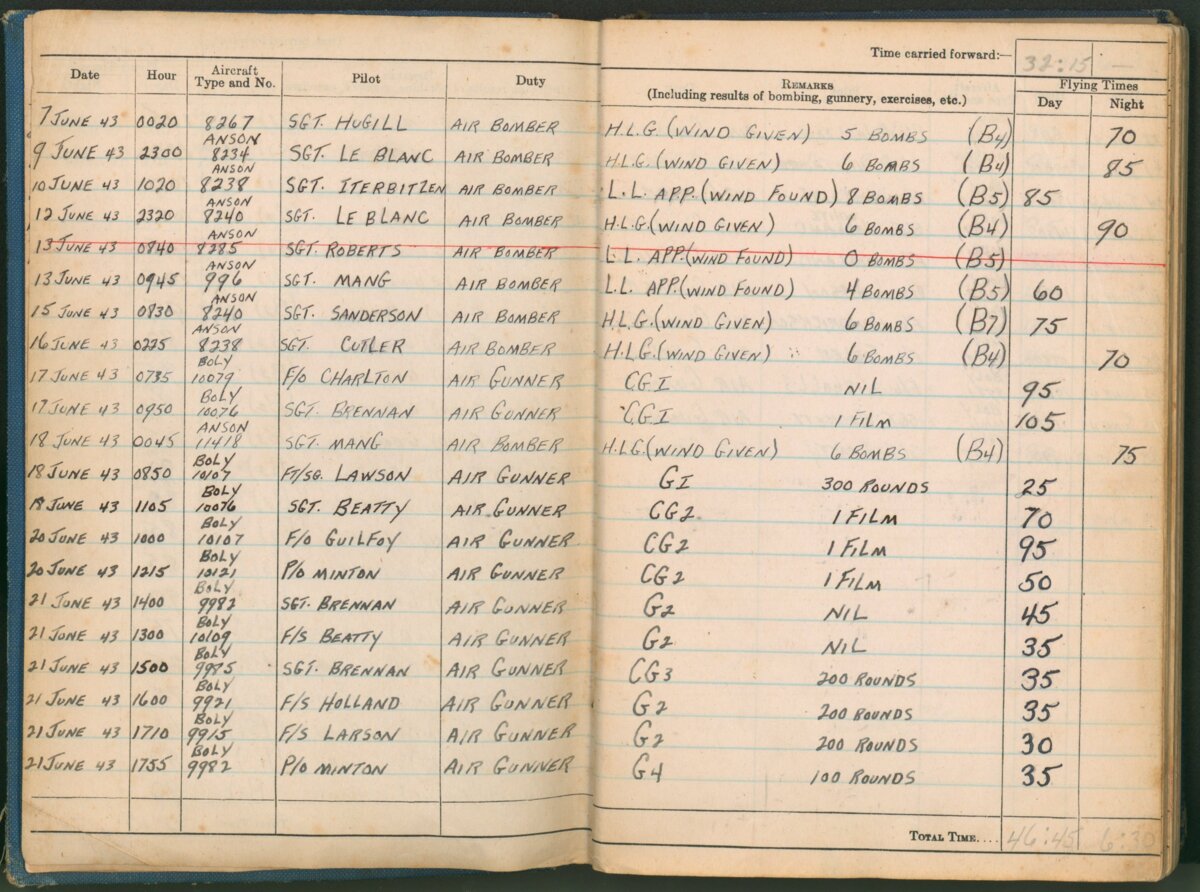 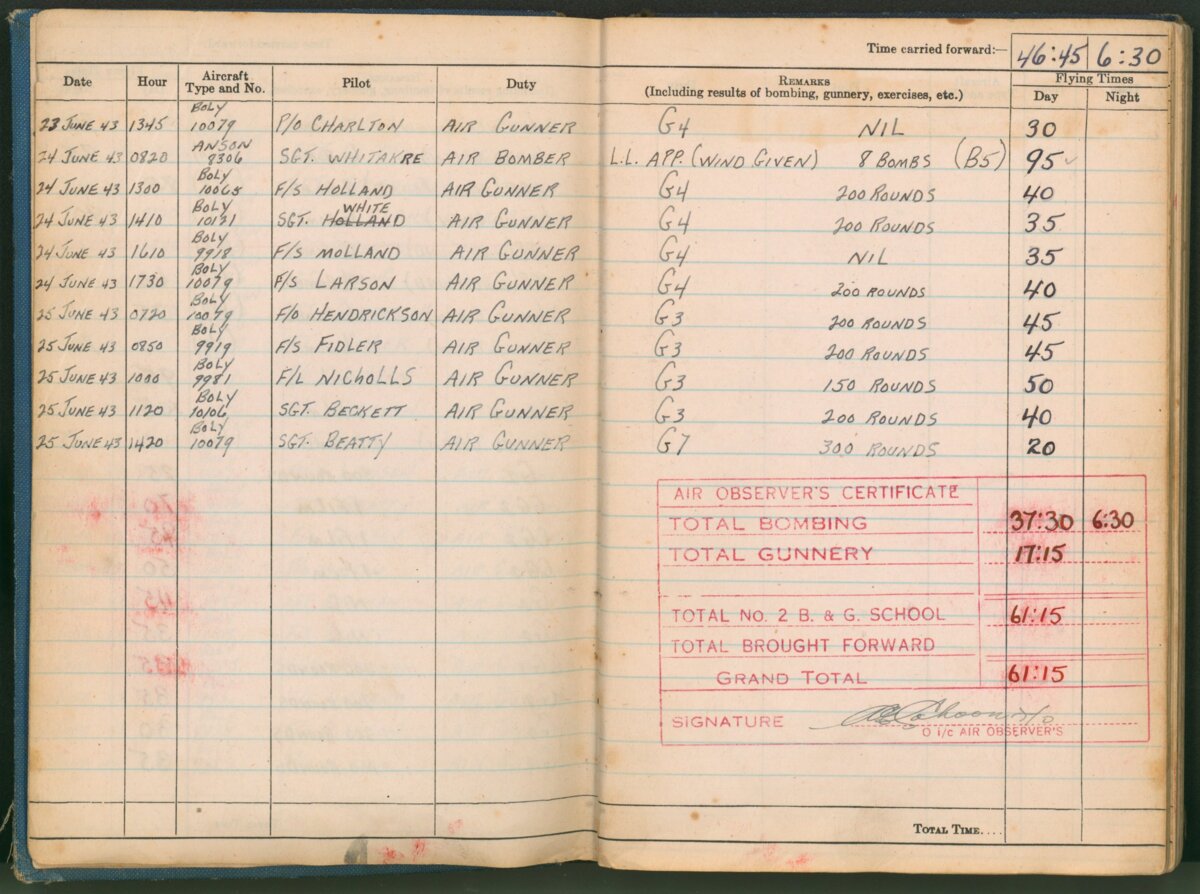 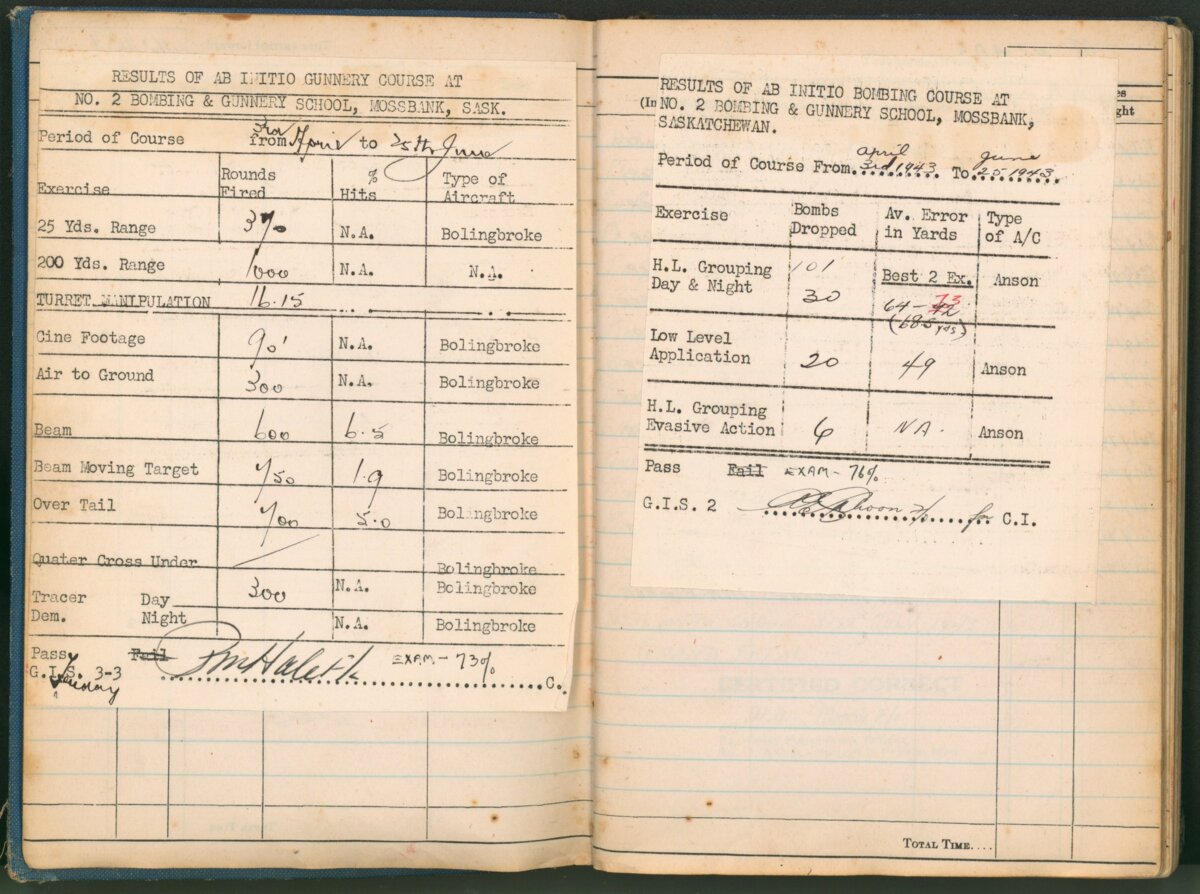 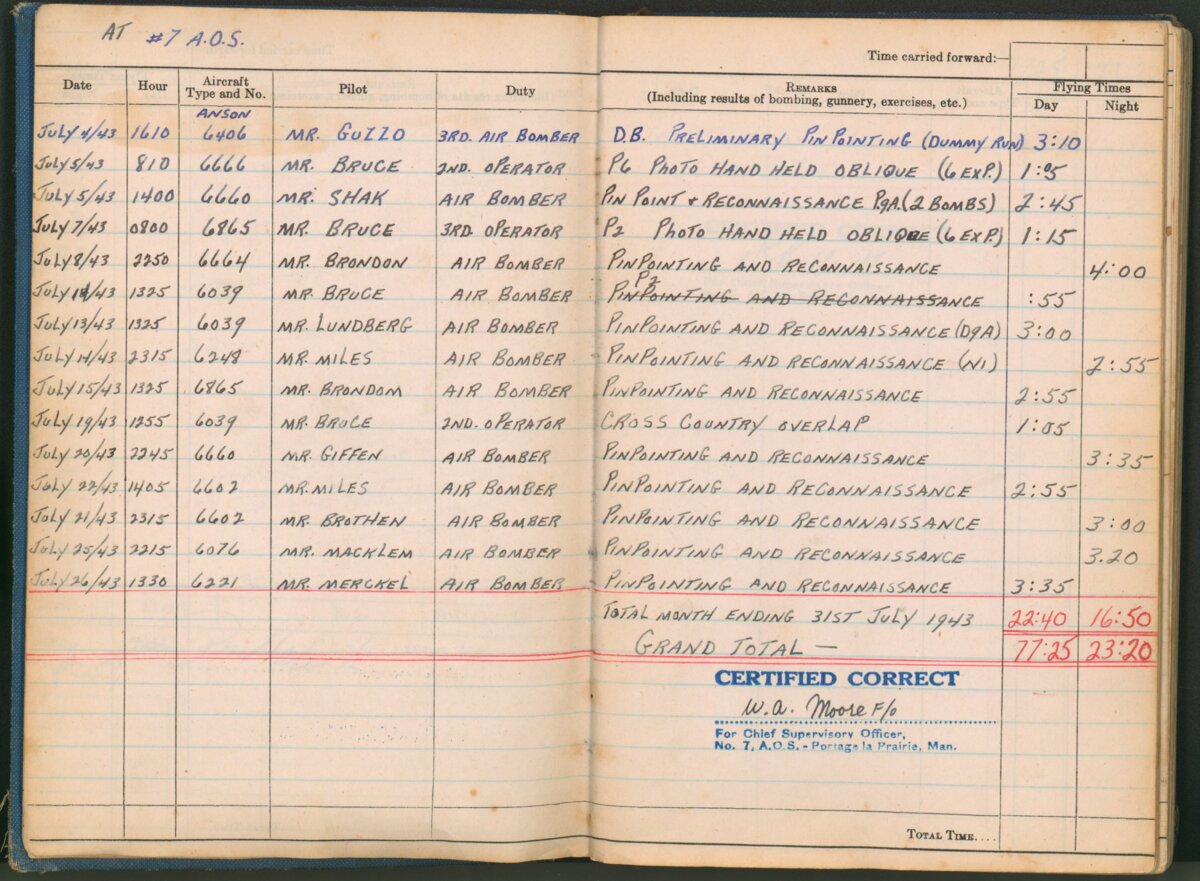 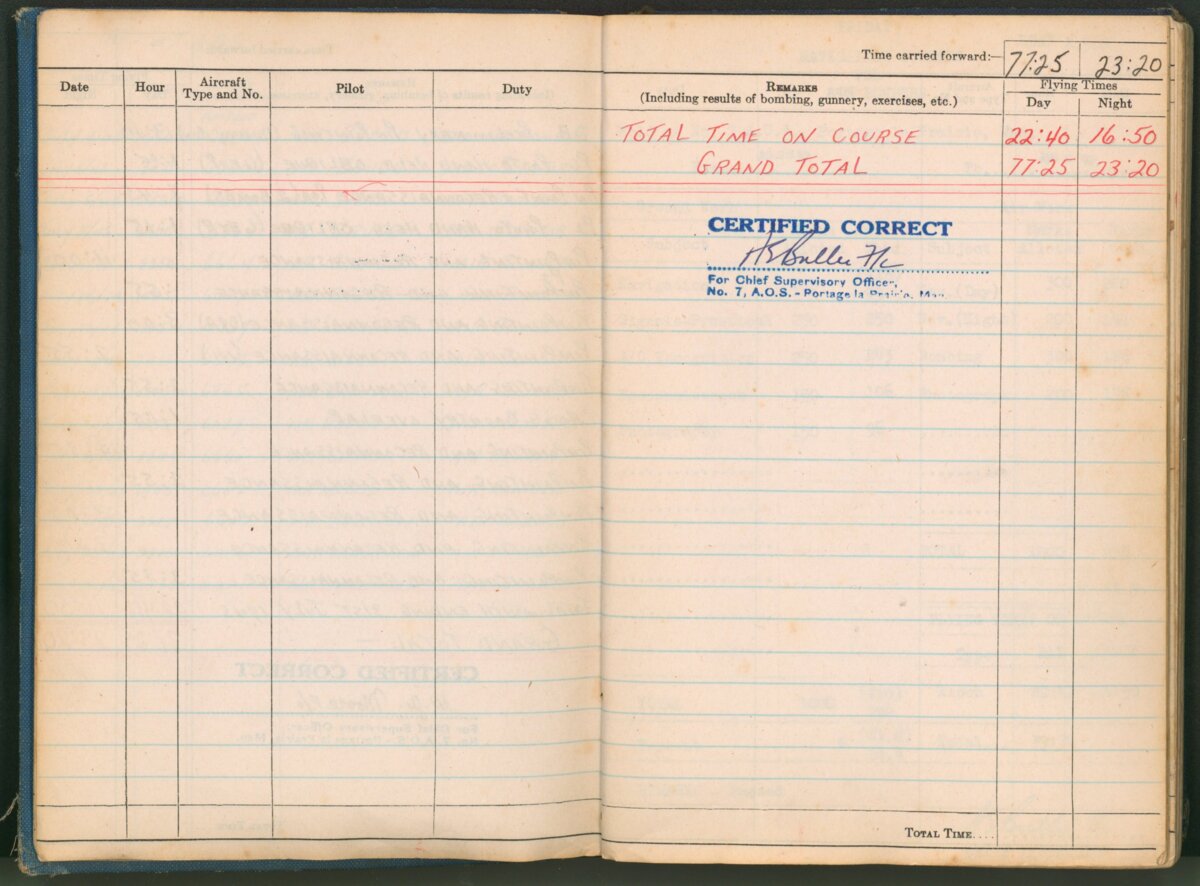 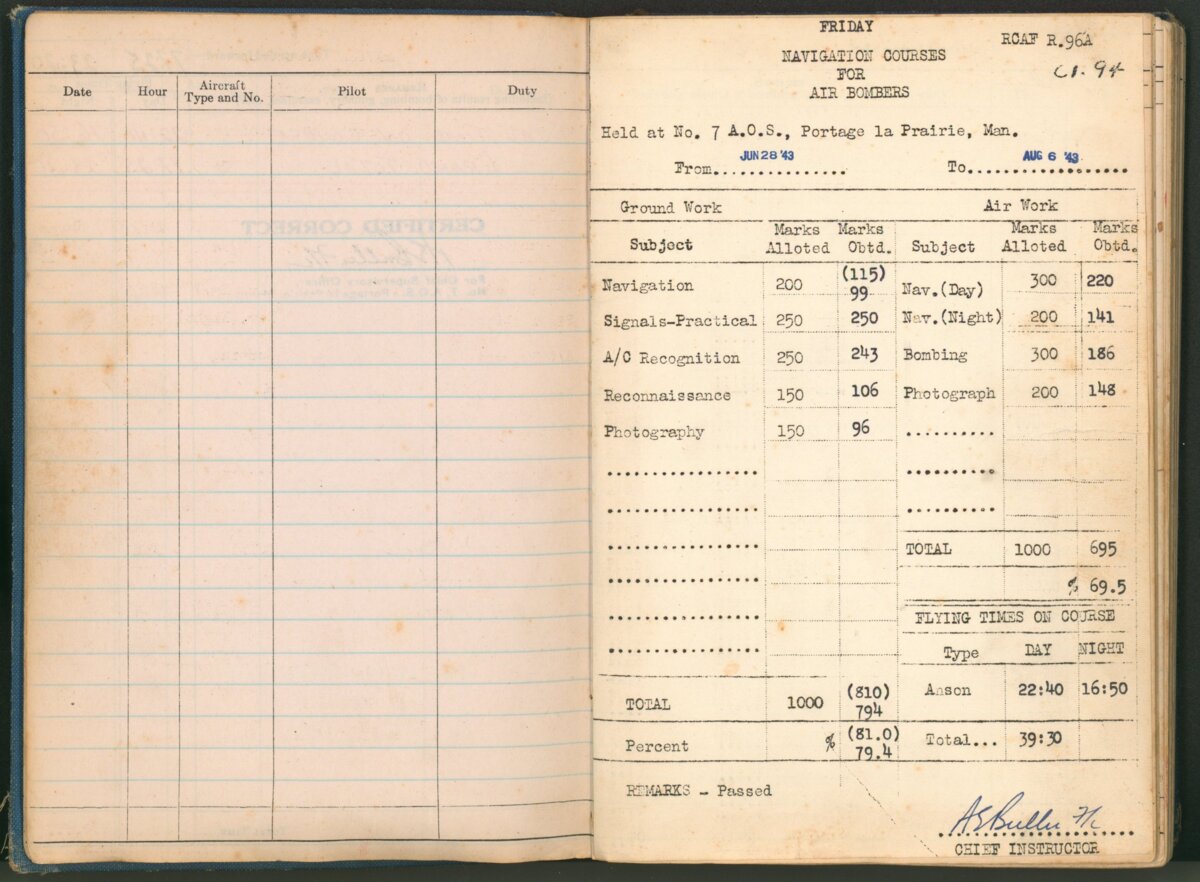 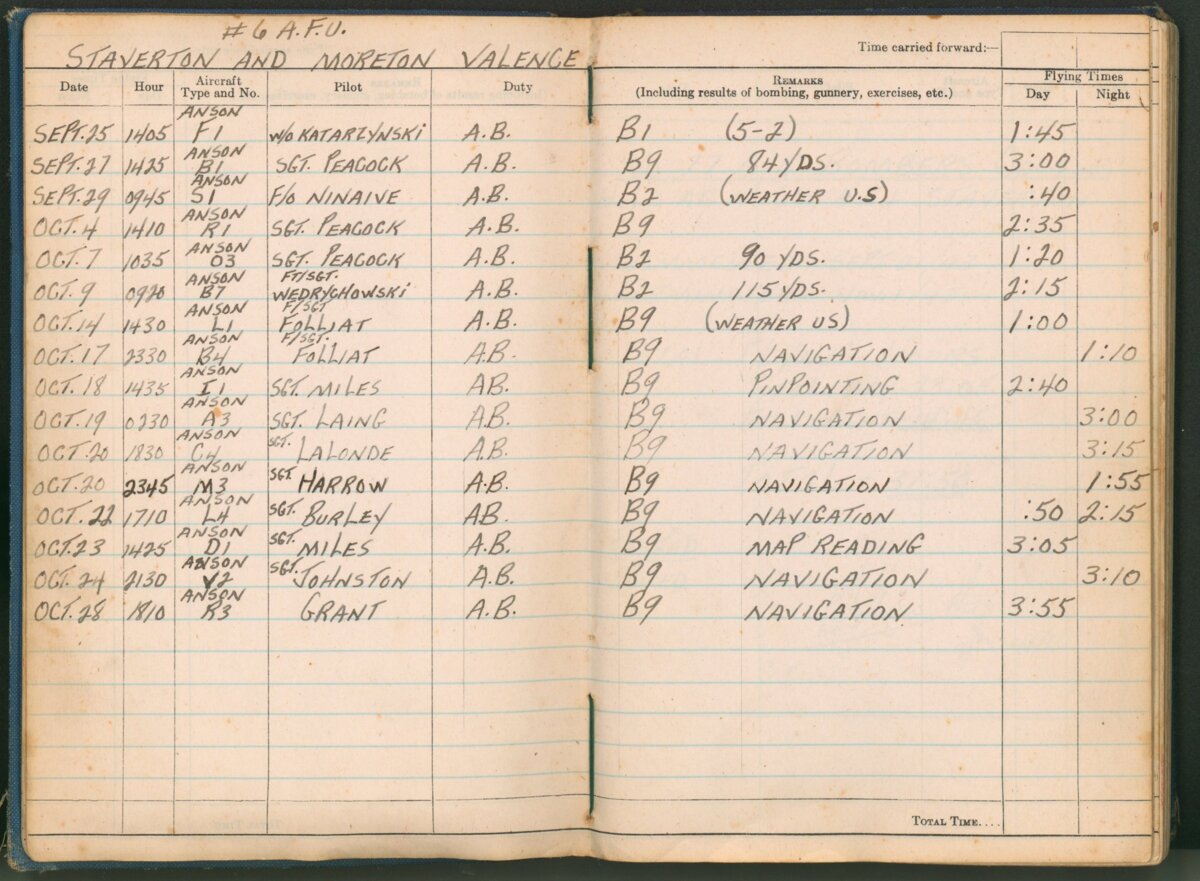 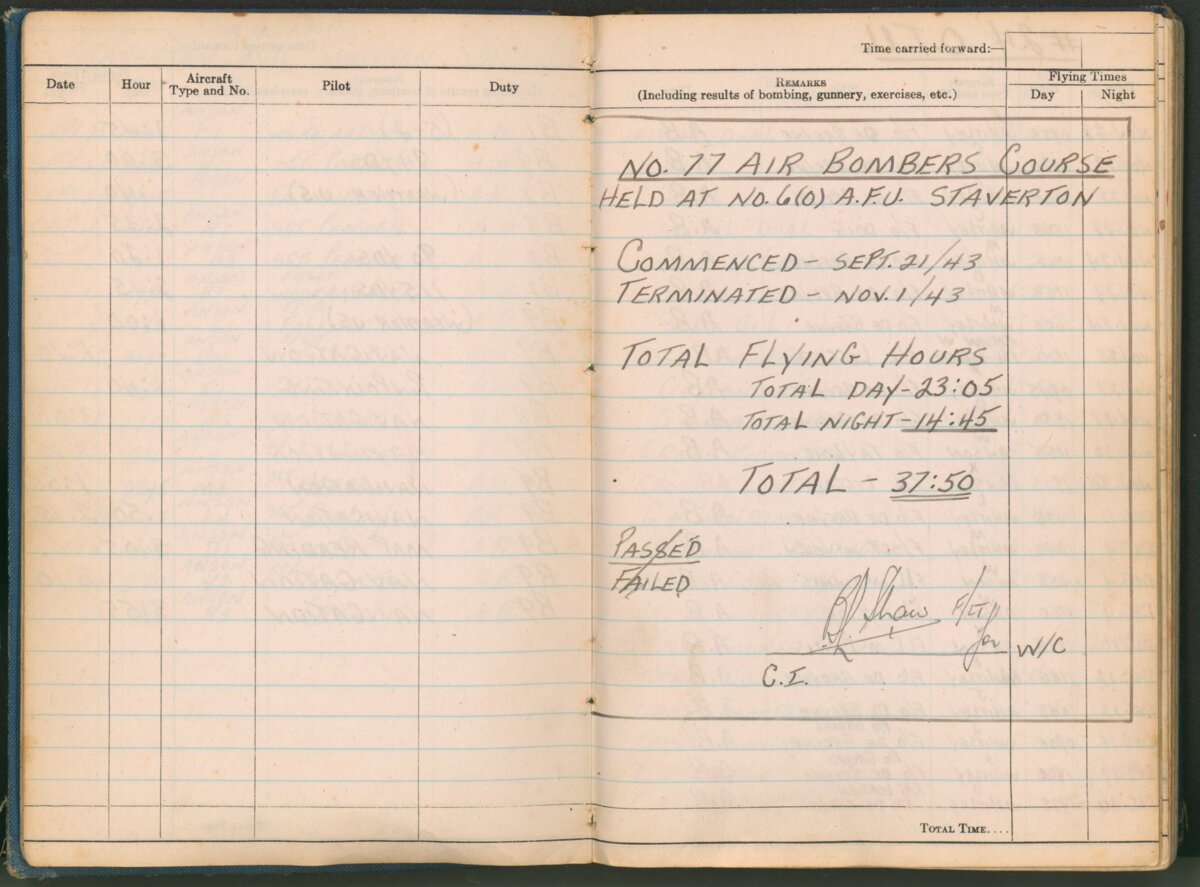 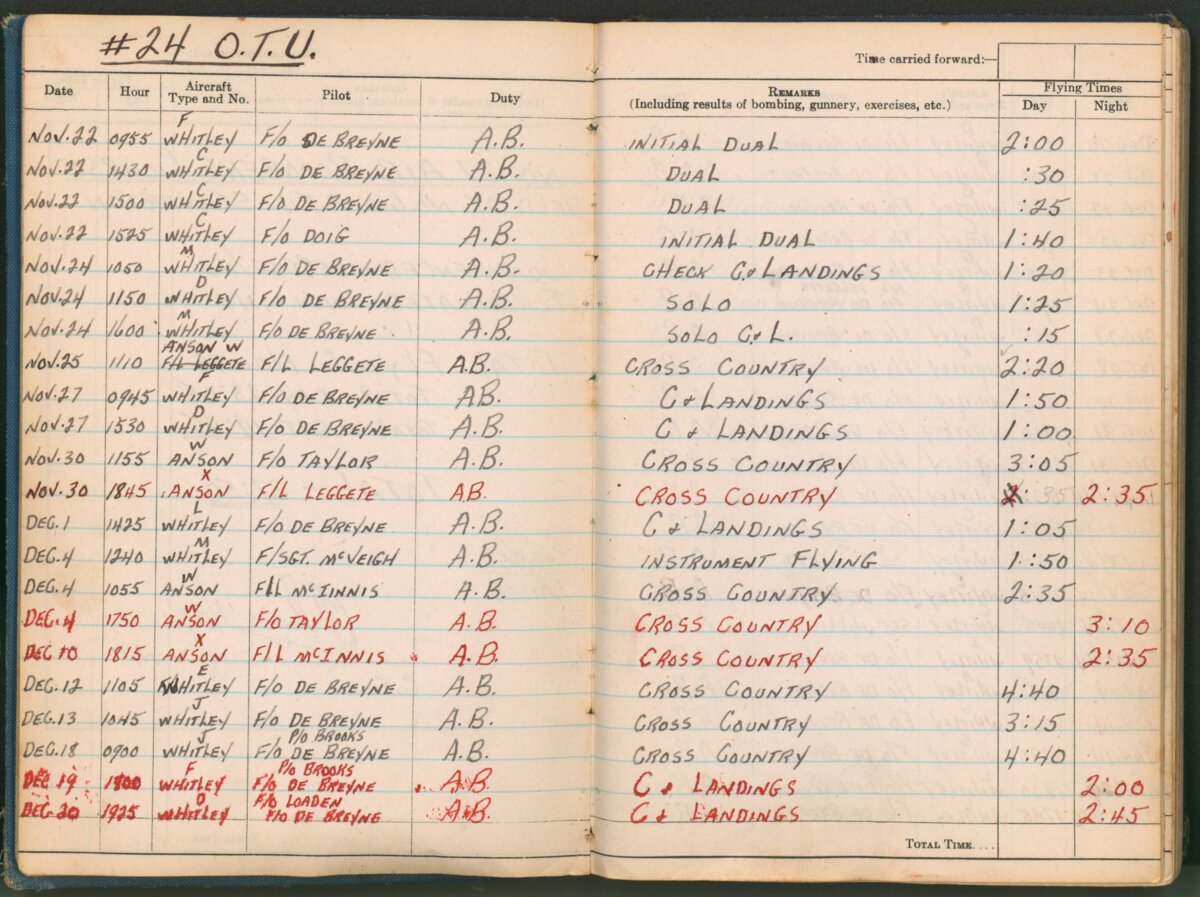 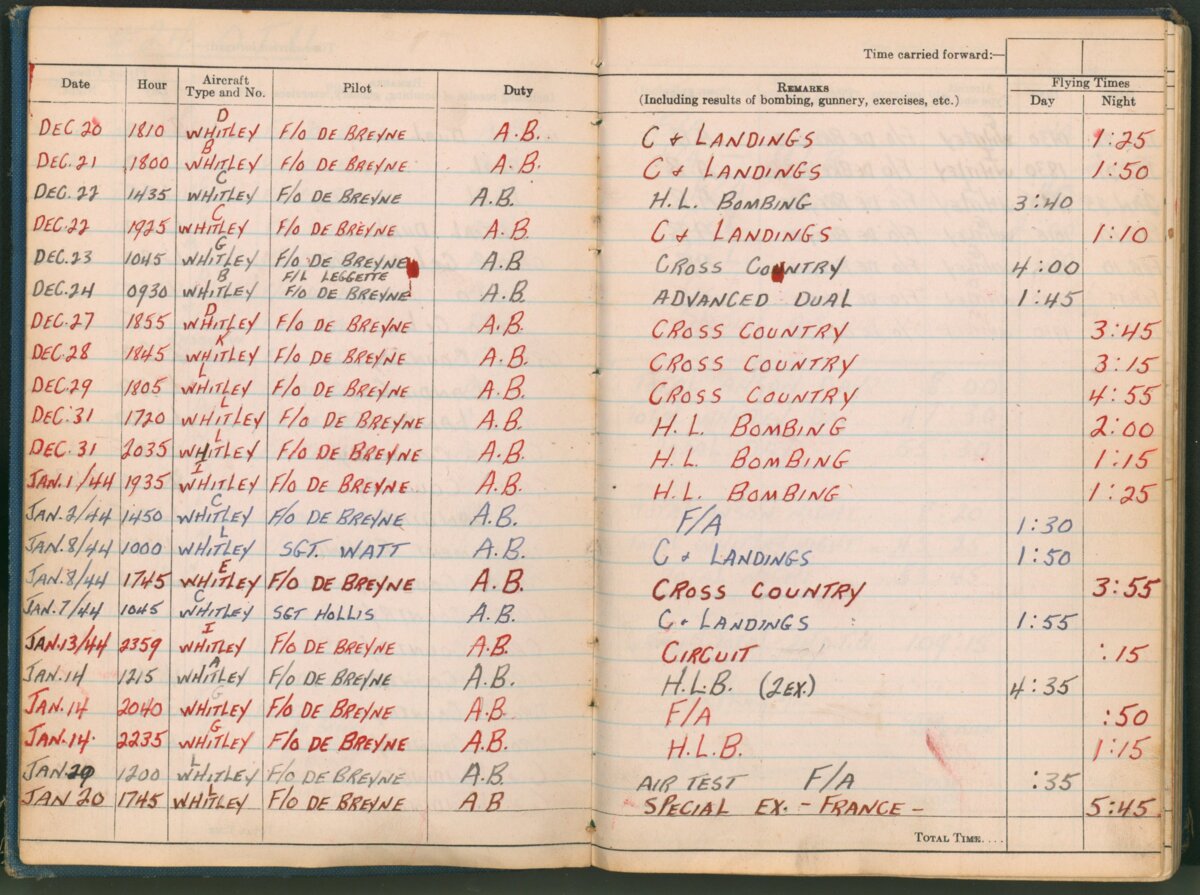 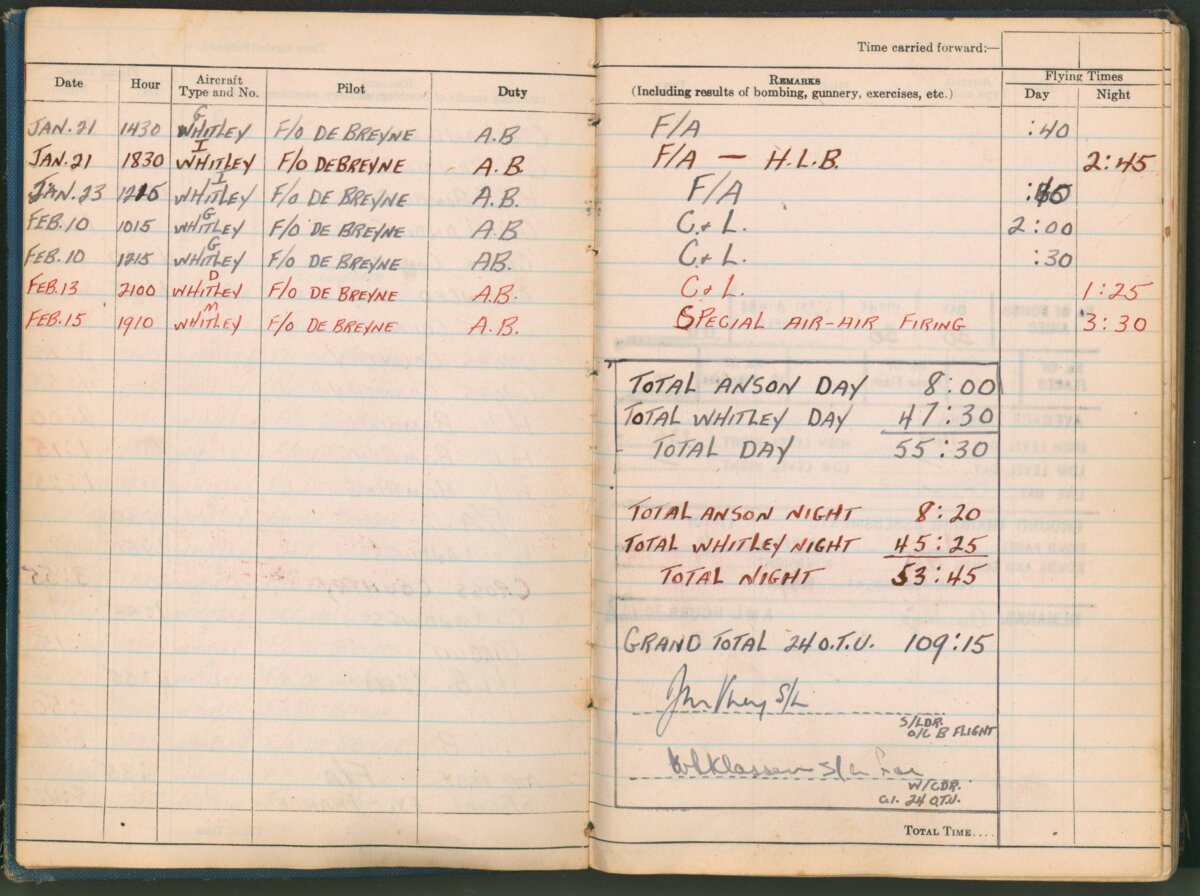 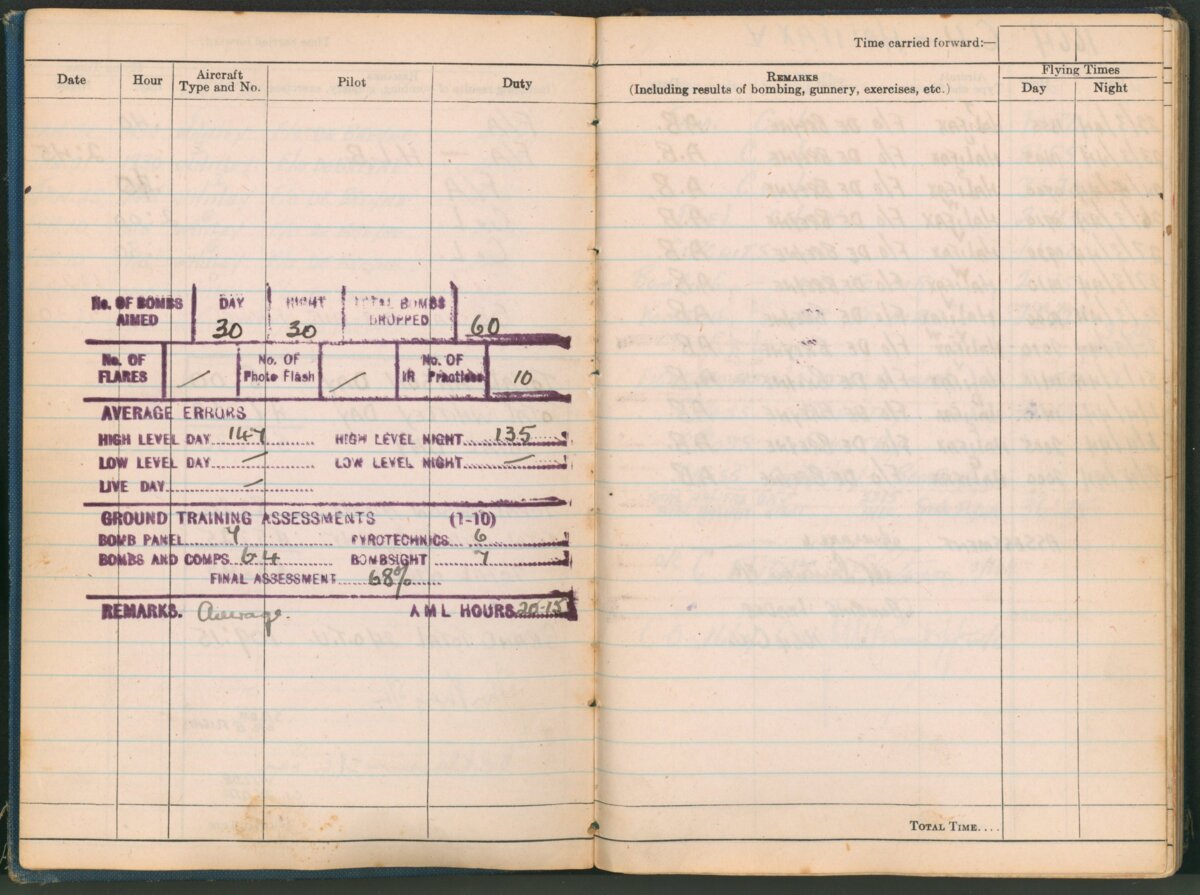 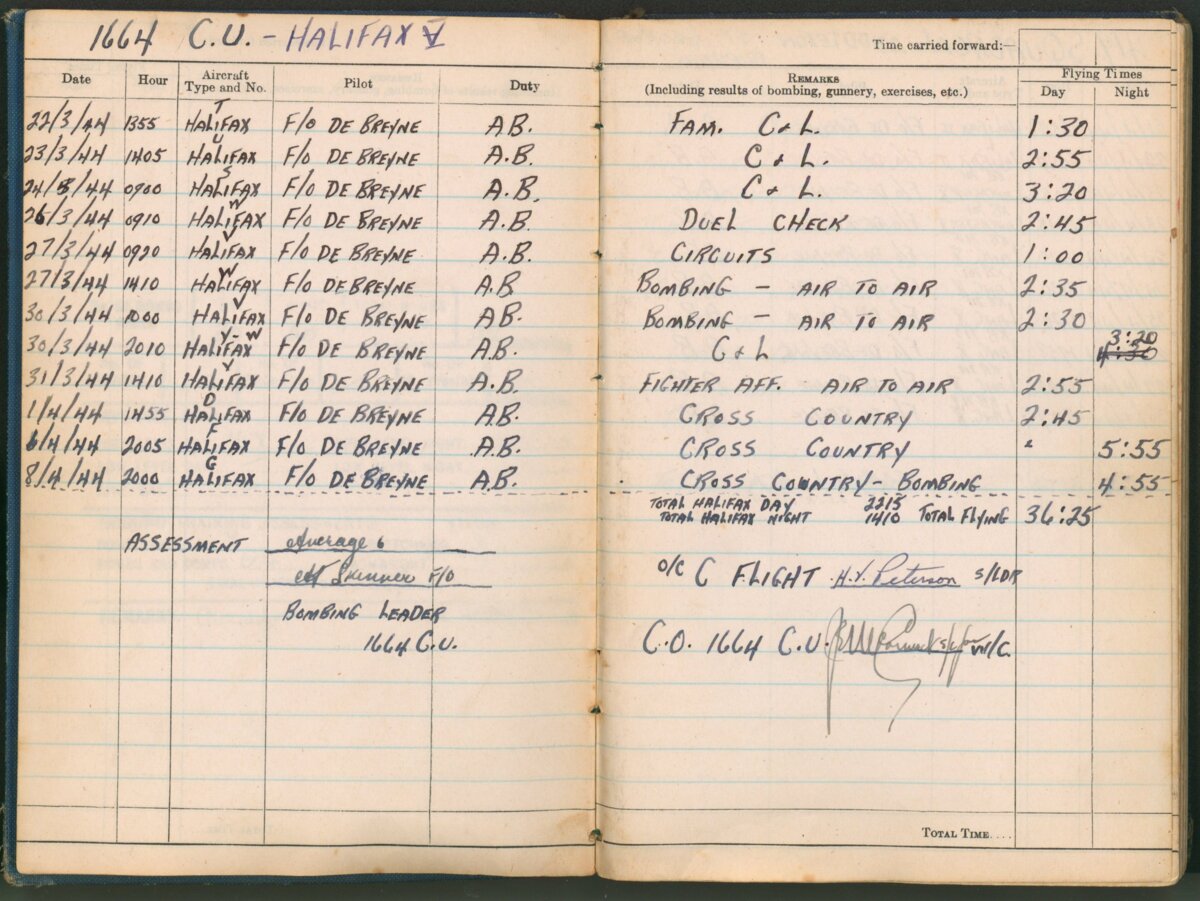 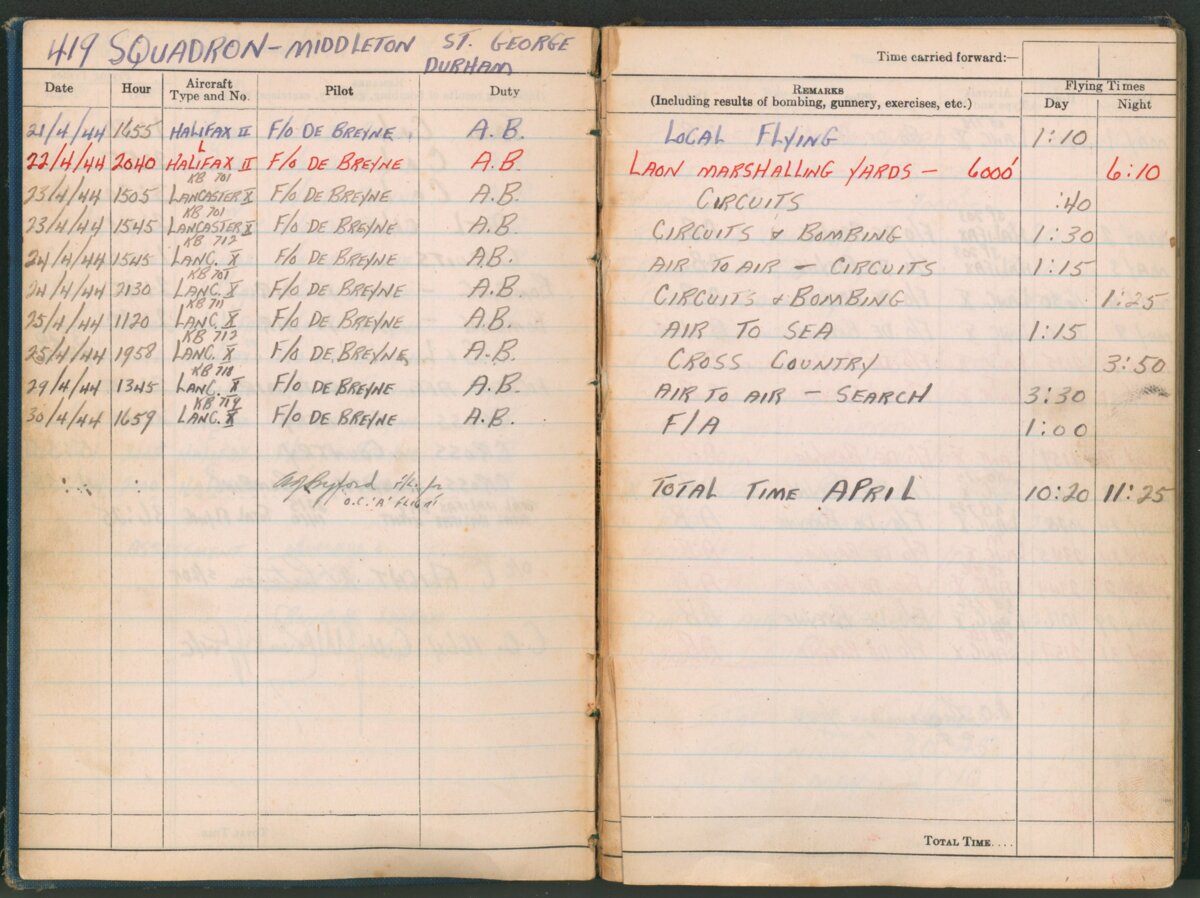 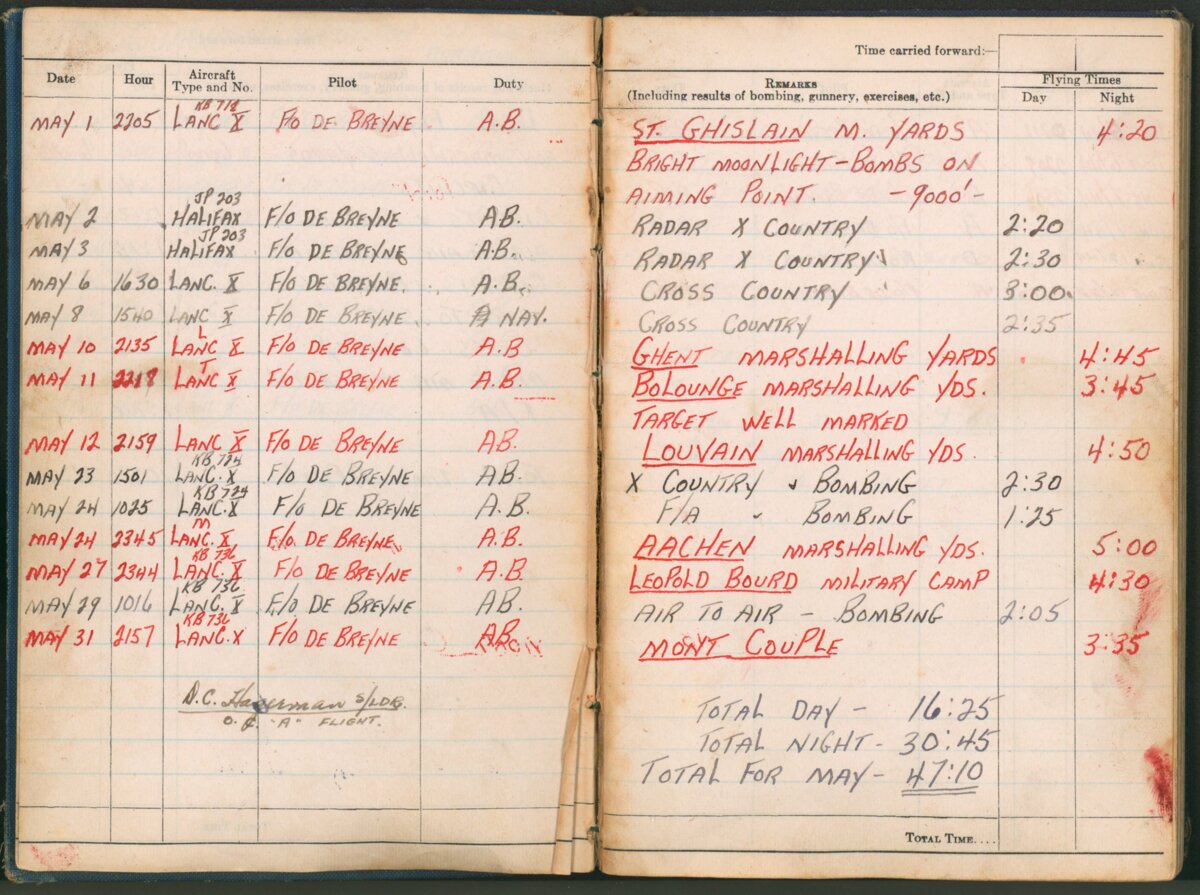 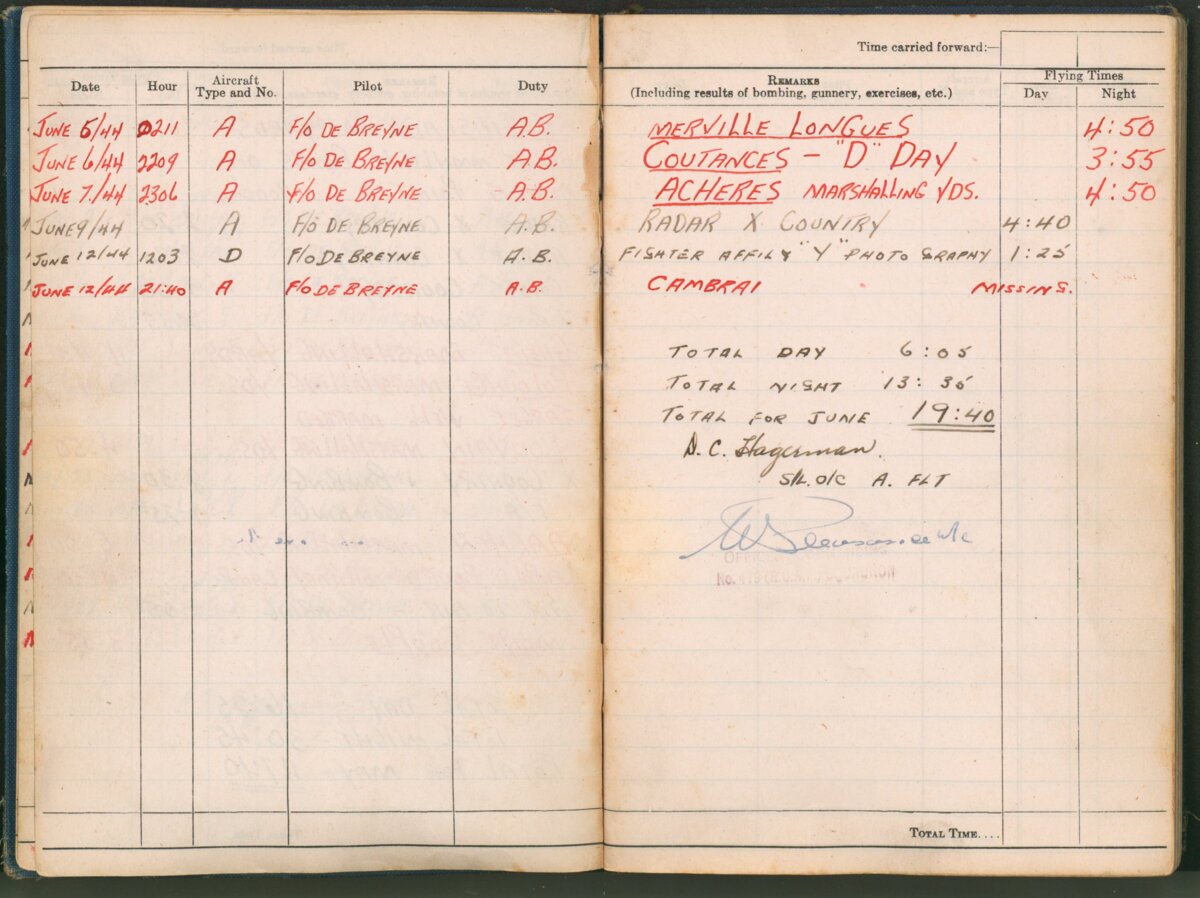 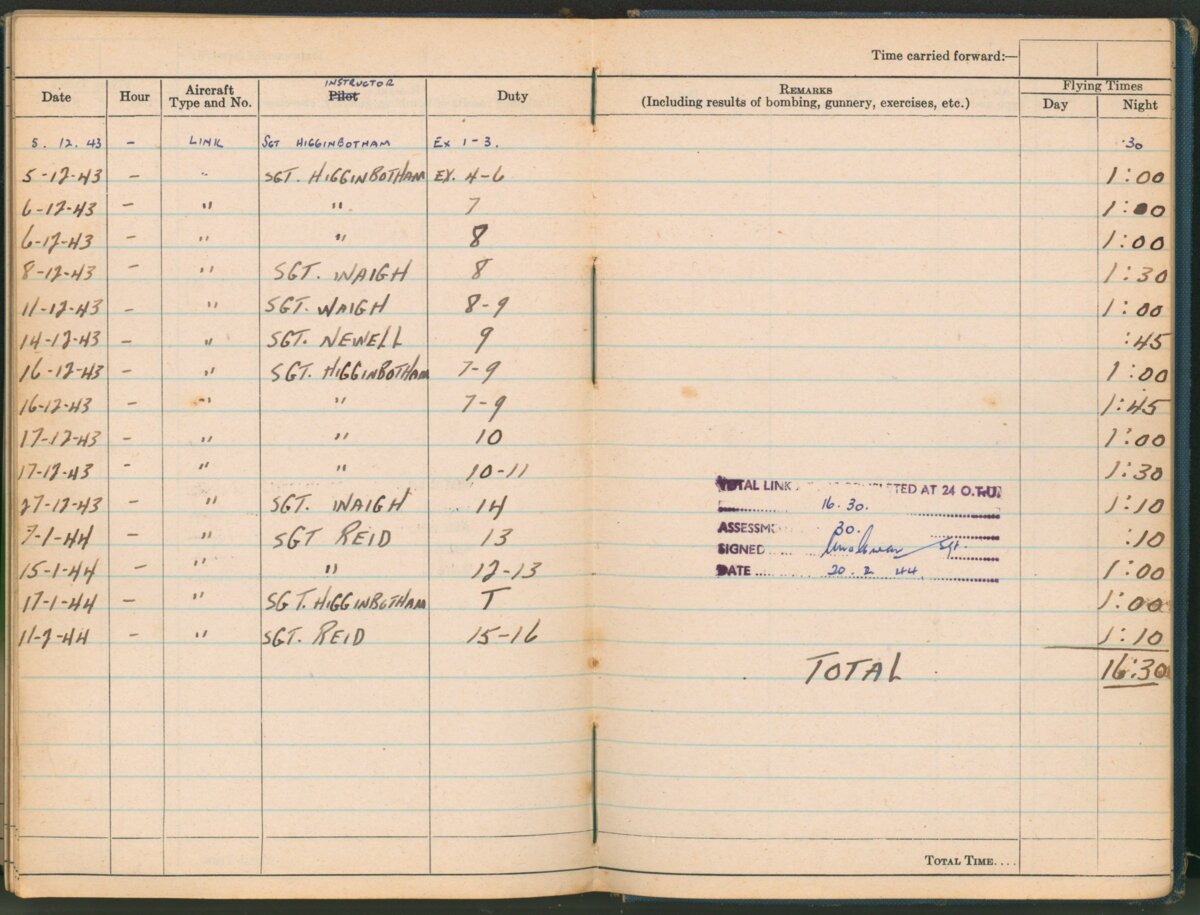 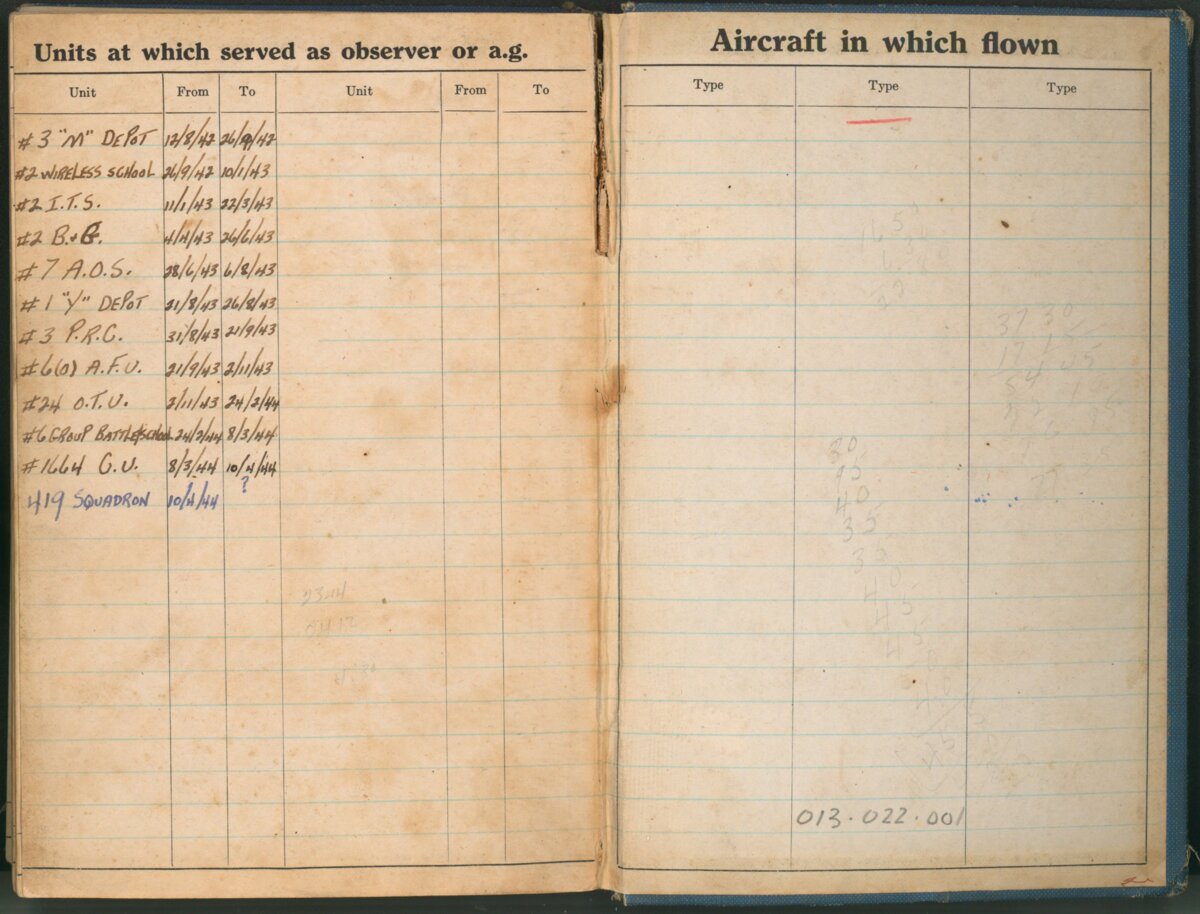 Observer's and Air Gunner's Flying Log Book. The name Friday, J. W. is printed in capital letters on the cover of the log.

Jack Friday was the bomb aimer on Lancaster Mk X, KB726, the Mynarski Lancaster. The log shows Friday's record of service from 26 April, 1943 to June 12 1944 when the aircraft was listed as missing on a raid over Cambrai.

Jack Friday was the fourth member to crew up with Lancaster KB726 VR.A. Jack joined the Royal Canadian Air Force in August 1942 and graduated from No. 2 Bombing & Gunnery School at Mossbank Saskatchewan, and No. 7 Air Observer’s School at Portage la Prairie, Manitoba as a navigator. He went overseas in August 1943 where from Bournemouth was posted to Moreton Valence and No. 6 Group, No. 419 Squadron.
June 12/13 1944, raid on Cambrai.
The crew of KB726 VR.A, Arthur “Art” de Breyne, the pilot, Roy Vigars, flight engineer, Jack Friday, bomb-aimer, Jim Kelly, wireless operator, Bob Bodie, navigator, Andrew “Andy” Mynarski, Pat Brophy, rear-gunner took off in their Avro Lancaster MkX on their 13th operation together. While flying on a raid to Cambrai, France, Jack and his crew were attacked by a Ju-88 nightfighter. The damage to the aircraft was substantial, the port wing was hit which disabled both engines and set the gas tanks between them on fire. Another fire broke out between the mid-upper and rear gunner turrets associated with the hydraulic fluid for the rear turret. The intercom as well as the pilot’s instrument panel were disabled. As the aircraft descended between 3000-4000’ and Art de Breyne, the pilot ordered the crew to bail out.
Jack Friday, the bomb aimer had pulled up the escape hatch in the nose of the aircraft and the force of the airstream had blown it up into his face, knocking him unconscious.
“I made my way down to the bomb-aimer’s position and found Jack Friday slumped on the floor, unconscious, as if having a nap. He had a gash over his eye. I rolled him over, clipped on his chute pack, and slid him over to the escape hatch and dropped him through the opening while holding on to the ripcord. This was a risky manoeuvre, as pulling the ripcord too soon, the parachute could wrap around the big tail wheel of the Lancaster, which was non-retractable. But Jack made it O.K.” – Roy Vigars, flight engineer.
Jack was found by two farm workers early in the morning of June 13, 1944. He was to learn of this later after the war from members of the French Underground. The farm workers took him to a doctor in a nearby village for medical aid. The doctor feared that Jack was seriously injured and turned him over to the Germans, with whom he felt Jack would receive better medical attention. The doctor also feared for his own life by attending to a downed airman, as many were shot for assisting Allied airmen if they were caught. Jack’s first memories were of waking up in a prison cell in Amiens, four days later on June 17, 1944. He remembered asking an American airmen sharing his cell to lift the bandage over his eye and tell him if he had lost his eye. The American told him that the Germans had apparently not stitched his wound, as the flap of skin from his injury was hanging down over his eye preventing him from seeing.
After he was deemed fit to travel, Jack was transported to Dulagluft Interrogation Centre. The first vivid memory Jack had after recovering, he had no recollection of the events of the raid after the briefing, was the bright sunlight at the railway station where to his surprise he saw Roy Vigars, crewmember and flight engineer of KB726. Together they were transported to Stalagluft 7 in Silesia, and were later liberated after months as Prisoners of War, on April 22, 1945. After liberation Jack traveled to England, and in June 1945 he returned home to Canada.

Donated to the museum by the Friday family.